GFT expert survey: digital banking has now arrived in every corner of the globe

Our latest survey of banking experts has revealed a clear trend among financial institutions: very few banks have yet to start thinking about digital transformation. Almost all banks are currently drafting their digital banking strategy or have already completed the strategy planning process. So the future is looking bright – although there have been a number of other changes since last year. For exmaple: banks are unhappy with the skills shortfall, especially when it comes to managing customer data.

260 people involved in the retail banking industry were questioned for the survey and more than half of these respondents were experts in middle or top management. The questions they were asked covered strategic planning, strategy implementation, key success factors, barriers encountered in digital banking, and experts’ expectations regarding the bank branches of the future. The focus of the survey lay in the countries in which GFT operates, so the survey sample stretched far beyond the borders of Europe. Overall, experts were questioned in Brazil, Germany, Italy, Mexico, Spain, Switzerland and the United Kingdom.

Digital banking appears to be an important issue in all corners of the globe. Only 6% of respondents have yet to start planning their strategy. The remaining respondents are either in the middle of the planning process (60%) or they already have a strategy in place (34%). Only 13% of banks have already completed strategy implementation, but this number is rising – albeit only gradually: one year ago, the number of respondents who said their strategy is now in place and has been implemented stood at 7%. Now this number is 9%.

The main stumbling blocks: security, regulatory issues and IT integration 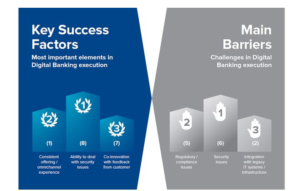 The main difficulties highlighted by the respondents lie in security issues. One year ago, security issues were ranked sixth, whereas this year they were seen as the most important barrier in all countries. The banks are also struggling with regulatory concerns and compliance, topics often raised by GFT. Both issues were much more likely to be considered important in this year’s survey compared to 2015. Another challenge banks face is integrating IT into legacy systems and existing landscapes – an aspect that digital banking actually facilitates in the first place.

One interesting finding is that there are two sides of the coin when it comes to security. On the one hand security issues are considered the biggest barrier faced, but on the other they are seen as the most important key success factor. A number of other aspects that affect customers are described as highly important if digital banking is going to succeed: in second place is a uniform and coherent user experience on all end devices, followed by co-innovation with the support of customer feedback in third.

The main motivation for moving to digital banking: customer focus

These findings are also reflected in the main motivations for pursuing a digital banking strategy. Although scores are a bit lower than last year, the key drivers are improving customer satisfaction and customer loyalty. Naturally, profitability still plays an important role and this factor was rated just below the others, coming in third.

This paints a clear picture: this is an era of change fuelled by digital technology. In the past, everything revolved around the product whereas now it is clear that the focus lies on the customer. Business systems and processes are no longer geared to designing products that are primarily there to generate good revenues. Customer satisfaction – and with this, anticipated loyalty – are now just as important. The banks have invested a great deal of time and energy in this area in recent years.

Another aspect that was highlighted by our study relates to process automation, where there is still a lot of catching up to do. Many banks (especially in Spain and Germany) say that managing, structuring and using data professionally is a major problem. The respondents mainly considered it important to analyse and use previously structured data and they were much less likely to describe accessing customer data or processing unstructured data as important. There are also deficits, especially if one considers the fact that the respondents saw customer management as extremely important, yet they also scored their own ability to use and access data at 56 per cent.

Overall, larger banks with more than 10,000 employees are a step ahead when it comes to digital technology. More than half of these banks surveyed already have a strategy in place. The percentages for the smaller banks and smallest banks lie at around 24 and 29 per cent respectively. But one thing that applies to respondents in all areas is that only 19% believe traditional full-service branches will still be with us in the future. Further, 5% of respondents believe that banking will be entirely digital – so there will be no more branches. What exactly the future holds for banking, we have yet to find out. But we do know one thing: there will be no getting around digital technology – even in this field.