How Will the Digital Transformation Affect the Future of Bank Branches?

The high street bank branch as we know it has been under threat for years. The threat started with the arrival of remote banking channels (phone and internet), continued with the introduction of mobile phone-based banking, and is reaching new heights with the coming of age of the so-called Millennial Generation – the under-30s who have grown up with computers, tablets and consoles and are considered “digital natives”.

This new social context is once again fuelling the debate on the future of financial institutions’ branch networks.

The first is that no, bank branches will not disappear, because customers still want them. 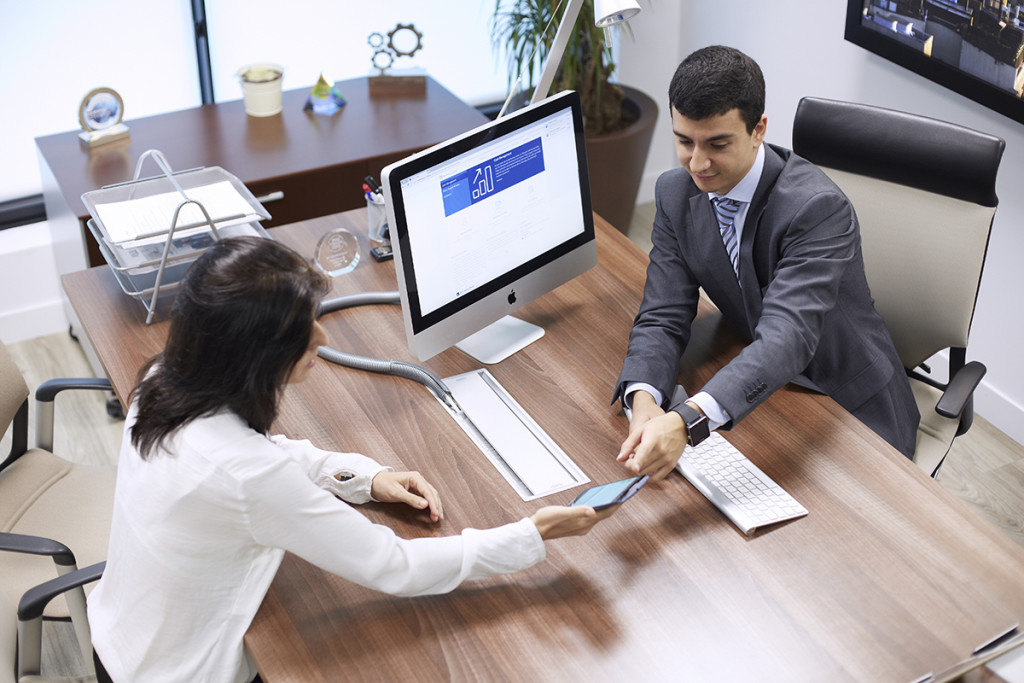 Here’s why customers still go to their bank branch:

The second conclusion reached is that the branch banking model is on the cusp of change. This will involve banks’ adapting to a new process of segmenting customers based on their degree of “digitalization”.

To use an analogy from cycling, new technologies and their rate of adoption by customers stretches out the pack of racers, or peloton. In the lead are the digital natives, who will carry out all their banking transactions on their mobile phone or over the Internet and never set foot in a branch. Trailing behind at the back of the pack are the customers who carry out all their transactions in branches because they either don’t know how to or don’t want to use digital channels. Between the leading group and those at the back of the pack are the bulk of the customers – those in limbo between the physical and the digital banking worlds, who will use digital channels and physical branches in every combination imaginable.

In light of this situation, the majority of banks are adopting one of two strategies. The first is the “disruption” strategy, in which banks become entirely digital and deal with only digital customers. Examples of such banks in Europe are Fidor Bank, Hello Bank or more recently, Imagin Bank.

The second strategy, which most traditional banks appear to be adopting, is the “evolution” strategy, where neither the branch customer nor the digital customer is excluded. These banks must adapt to meet the needs of all customer segments, each of which has its own unique characteristics. To undertake this successfully, banks must review their existing branch model in order to enable it to evolve. 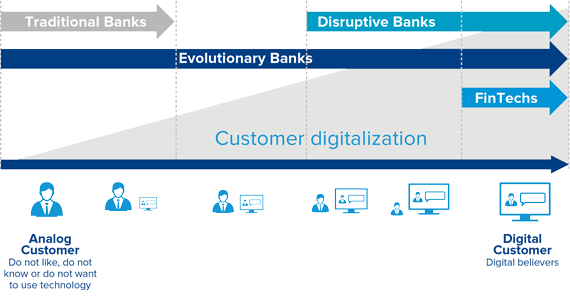 So, what will the branch of the future be like?

There is no single answer to this question. Each bank will define its own model, depending on its DNA, its target socioeconomic segment(s), its geographical and cultural location, and more. The change will affect the nature and function of branch itself and will involve integrating the bank’s interaction model across channels to ensure a smooth and coherent user experience in all customer segments. At the same time, the branch should conduct a review of its internal procedures, including risk assessment flows and approval of lines of credit. Traditional banks undergoing transition must take note of the fact that no FinTech or other non-traditional financial start-up would ever get a line of credit approved using traditional scoring models.

At our Digital Banking Labs in Sant Cugat (Barcelona) and Stuttgart, GFT has developed a working method that enables us to provide broad-based support to financial institutions during the process of defining, developing, and testing use cases for their proposed new branch model.

The Lab’s methodology is designed to tackle the change through a detailed analysis of the three pillars underpinning the branch: accessibility, interaction, and space. 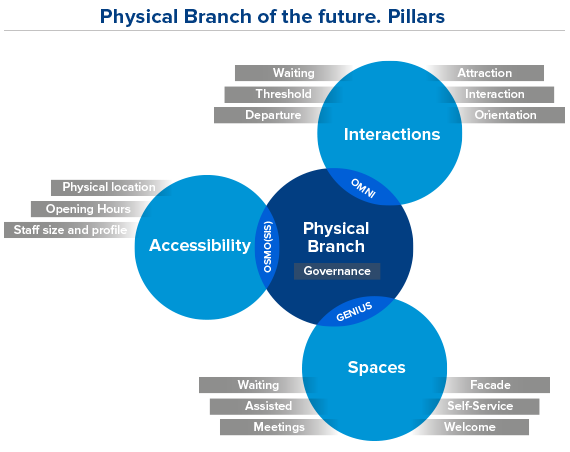 The impact of the changes must be analysed and monitored in order to make the appropriate adjustments and improvements that will enable financial institutions to adopt the new model quickly and smoothly; even the most gradual changes can sometimes lead to design errors that require adjustment.

This process of adaptation means that it is highly likely the physical appearance of bank branches will change considerably in the coming months, both in terms of their design and the ways in which customers are served. 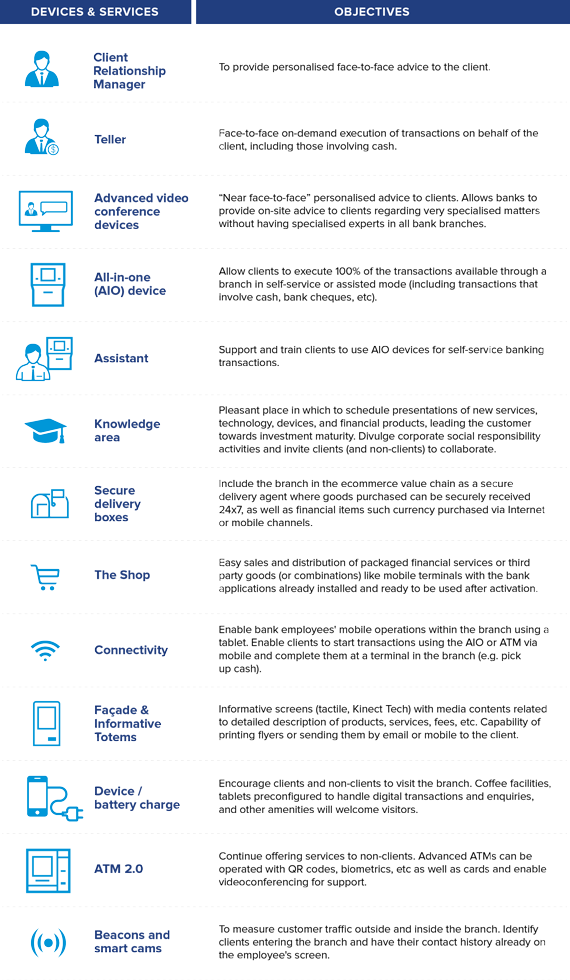 Branches will continue to offer a personalised service to customers who request it (in person or by videoconference), but they will also equip customers with the ability to perform transactions themselves that were previously carried out by bank employees.

“Self-service” transactions will also be carried out by customers using their mobile or tablet, either in the branch itself (using the branch’s free Wi-Fi connection for customers), at home, or while customers are out and about. These transactions can then be completed at an AIO (all-in-one) or ATM terminal, where customers can, for example, collect the cash they have requested.

While customers make the transition to “self-service” users, the workload of current branch employees will decrease, freeing them up to carry out sales, advisory, and even financial disclosure functions. This will benefit customers (by increasing their decision-making capacity when investing funds or applying for financing) and the bank (by improving the tarnished reputation of certain sections of the financial sector and by allowing more sophisticated products with a higher profit margin to be sold).

The branch will also be the channel used by financial institutions for all physical interactions with their existing and future customers. It will be used as a delivery point for products purchased on line (including financial products such as foreign currency), for the distribution of product packs (mobile phones with bank apps installed and ready to use), for informational and training activities of any kind (for example, to involve customers in the bank’s corporate social responsibility strategy), and to provide detailed information on products and services in a familiar and personalised way. The goal is to create a user experience similar to that of Apple users when they visit Genius Bars in Apple Stores. 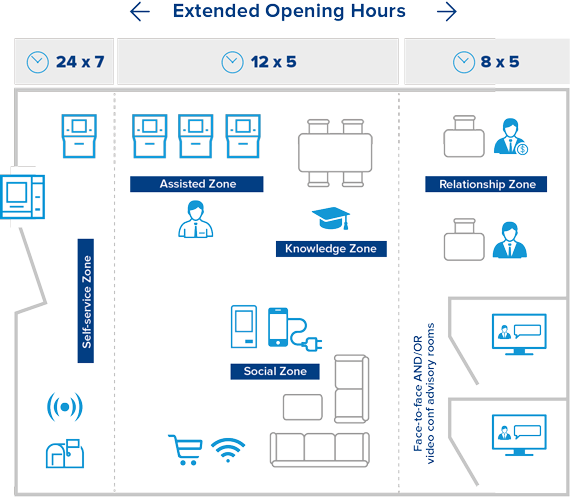 This new, less staff-intensive branch model will allow banks to extend their opening hours without having to increase their payroll, and even to expand their branch network to new areas where they currently do not have a presence by opening 24/7 offices that are fully automated (without staff), semi-automated or manned (with a skeleton staff). 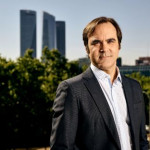 Global banking is being disrupted from many angles: new open banking regulations, change in consumer habits, launch of virtual banks… Most banks are waking up to this reality and while ...

Like its predecessor open banking, open finance aims to promote competition among financial providers, drive digital innovation and promote new, open, data-driven services. The ultimate beneficiaries are customers who should ...