How do you live with continuous regulatory change in ‘The New Normal’ environment for financial markets?

As banks continue to be challenged by waves of regulation could we already be at a tipping point, where banks now require new systems or operating models that will enable them to easily adapt their entire organisation to any new rules and regulations, rather than dealing individually with each emerging regulatory requirement? Jeremy Taylor (Head of Business Consulting UK, GFT) argues that this new environment has long begun and is a normality that institutions must learn to thrive in.

Since the 2008 financial crisis, the banking community has found itself transported into a new reality, with ongoing regulatory change now becoming, more regular, more concurrent, and more extensive, a situation we describe as ‘The New Normal’ for financial markets.

Banks are facing an endless flow of regulation with little prospect of this decreasing in the near future. As regulation becomes more prevalent and widespread, banks are likely to find this over-bearing new world of regulation even more oppressive in the future. The crisis of 2008 was so profound and its effects so far reaching, that regulators are determined to ensure that such mistakes will not be repeated again.

Banks have had a few years to come to terms with this new environment but the challenges they face have not become any easier. A combination of national and international regulation, from a variety of regulatory bodies, has highlighted specific areas of practice that banks are required to address. They include: the need for increased levels of capital held, improvements in reporting and risk management practices, better data governance and aggregation capabilities, more effective board level decision making, and the implementation of major projects to upgrade existing IT legacy systems.

Banks have been under pressure to transform their existing operating models and establish appropriate frameworks to respond to these competing regulations, whilst at the same time trying to reduce costs, maintain profits and remain competitive.

There is an acceptance throughout the industry that there needed to be greater focus on the conduct and performance of banks in response to the financial crisis, but with the huge increase in regulatory directives, it is perhaps understandable that some sense of fatigue towards regulation has begun to emerge. Speaking at a conference in Istanbul in February ahead of a G20 meeting, Bank of England governor Mark Carney urged the G20 to continue in their push to implement global regulatory reforms and to not give in to reform fatigue.

The next challenge for banks is to continue implementing solutions that will allow them to not only survive in this regulatory environment, but actively prosper and allow their attention to return back towards growth.

In this ‘New Normal’ environment, compliance will be the key driver for growth and gaining a competitive advantage. Banks should not view compliance as simply a way of ‘keeping up appearances’ for the benefit of regulators, nor is it a punishment for the mistakes of the past. Regulation is about keeping banks safe and healthy. Beyond that, it is an opportunity for innovation and improved operational efficiency.

It is now time for banks to move beyond mere compliance and recognise the incentives and competitive advantage that accompany improved regulatory compliance. It will require fundamental operational and cultural change, but this must be viewed as a necessity and not a choice in this ‘New Normal’ environment where the tipping point has long been reached. 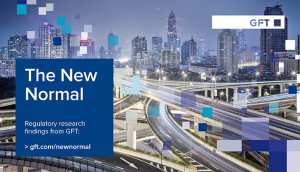